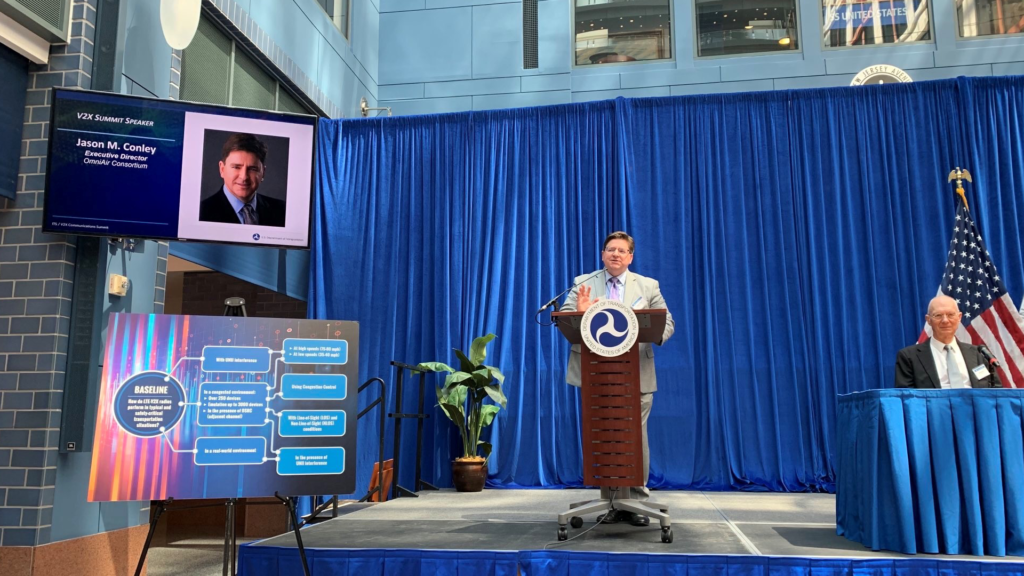 Last week, the U.S. Department of Transportation hosted a V2X Summit, bringing together hundreds of transportation stakeholders, including state and local officials, automotive OEMs, technology vendors, and leading ITS organizations, to discuss the path to deployment for C-V2X in the United States. The summit drew over 150 participants on-site, with nearly 1,000 additional participants online.

Officials from the Federal Highway Administration and the Office of the Secretary detailed key funding opportunities, explicitly for connected vehicle projects. These included the Safe Streets for All (SS4A) grant program, with over $1 billion available in FY2022, and the Strengthening Mobility and Revolutionizing Transportation (SMART) grant program, with $100 million in FY2022.

Jason Conley, Executive Director for OmniAir Consortium®, presented OmniAir’s readiness program for Cellular Vehicle-to-Everything (C-V2X), including Plugfests and certification part of a panel on testing. Mr. Conley discussed the importance of certification in building trust and C-V2X to advance beyond pilot and demonstration projects to full-scale operational deployments.

“For every smartphone wireless technology, certification helps establish trust and consumer adoption. C-V2X should be no different,” said Jason Conley, Executive Director for OmniAir Consortium. “Independent, third-party testing and certification, such as that offered by OmniAir®, will help to ensure that C-V2X is ready to deploy.”

Jason noted the progress that OmniAir has seen in C-V2X device performance over the past two years across our Plugfests. He presented anonymized, aggregated results from the nearly 20 C-V2X devices tested at OmniAir’s last Plugfest in Ann Arbor, noting the areas of improvement. The upcoming OmniAir Costa del Sol Plugfest in October is expected to show further C-V2X technology maturation and readiness progress.

The V2X Summit also included breakout sessions in which industry and government stakeholders offered recommendations on the path to deployment.

Many stakeholders cited regulatory uncertainty as the key stumbling roadblock to greater deployment and the need for either a mandate or to include V2X in the National Highway Transportation Safety Administration’s (NHTSA) NCAP Five-Star Safety ratings.

Still, others cited the need for the U.S. Department of Transportation to adopt a strategic plan and framework for deploying C-V2X, while some suggested that it is time for automotive OEMs and stage DOTs to take the lead.

OmniAir’s presentation from the V2X Summit is available here.

RUC 101 – Everything You Wanted to Know